Taiwan is famous for its colorful Taoist temples. They can be found everywhere–off of dusty highways, on the beach, perched high in the mountains. Naturally I was drawn by their vibrant color, abundant detail, whimsical dragons, and intimidating deities. 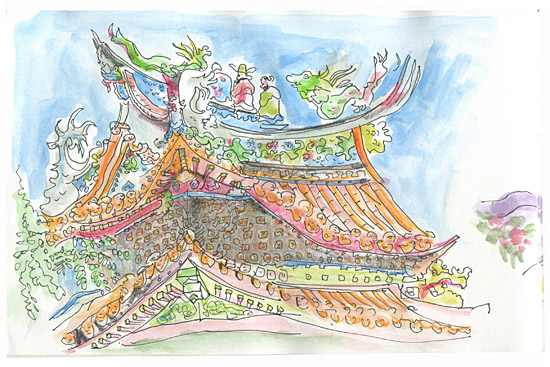 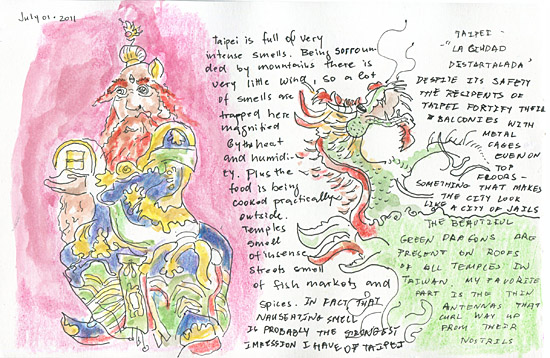 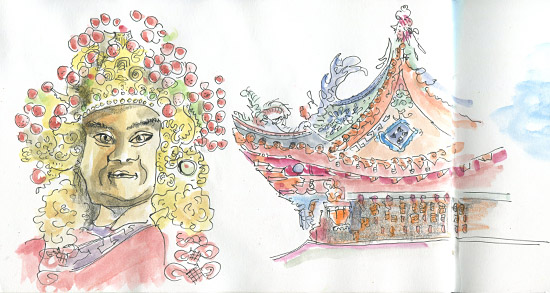 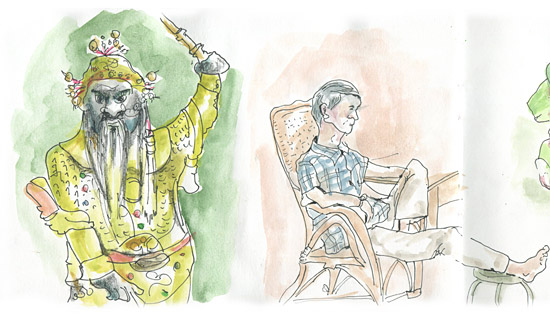 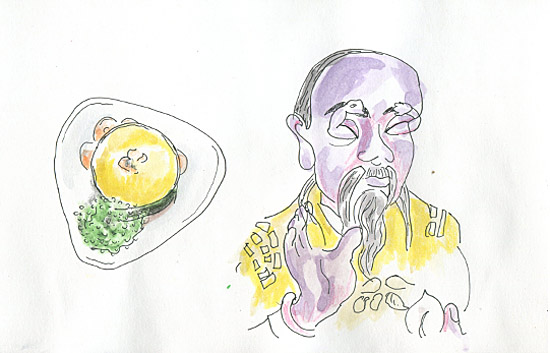 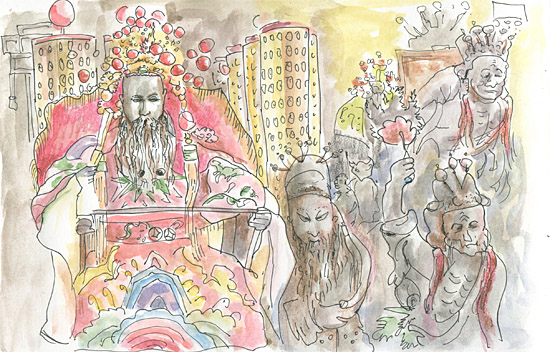 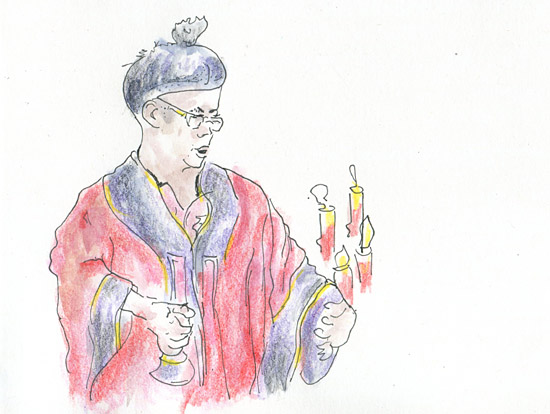 Oh, the dragons... Taiwanese tend to be incredibly superstitious. Dragons mean good luck, and are practically everywhere. Number "4" is homophonous with the word for "death" in Chinese and therefore is carefully avoided. There was no forth floor in the hotel where I stayed in Taipei. Often the number four is missing from the numbering of train cars, menu prices, street signs, and even license plates. 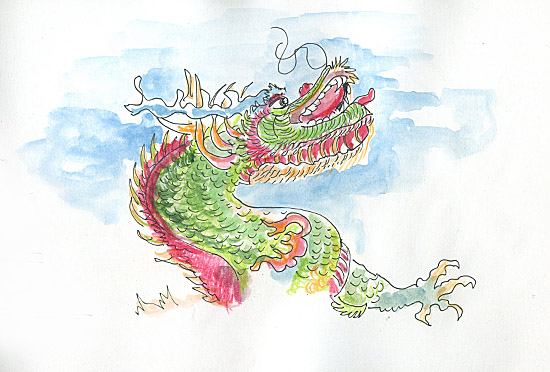 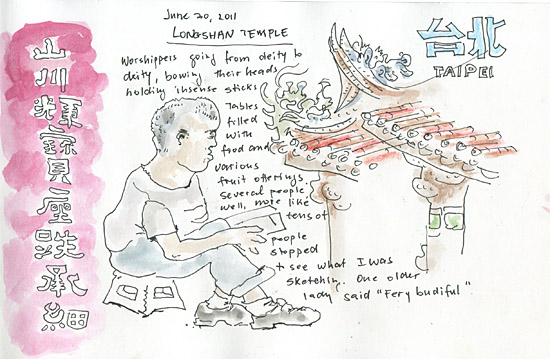 Taiwanese people were incredibly helpful and welcoming. I didn't have a single unpleasant exchange the whole time in Taiwan. They also were always fascinated by me sketching and would not hesitate to approach me and look over my shoulder for a long time as I was drawing in temples, on beaches, streets and trains.

The sketch below illustrates the perfectly guileless nature of the people I met. A young woman with a group of her friends got on the train sporting absolutely horrendous pedicure (long, claw like nails painted black and dotted with sparkles). She also had a pair of gladiator flip flops to complete the picture. Juan and I amused ourselves by making fun of her footwear and of course making a humorous sketch. Young people noticed that I was sketching them, came up to us, and amidst comments like "oh, fery fery beautiful" started to take snap shots of my sketch and me, not showing the slightest degree of irritation at the fact that we were making fun of them. 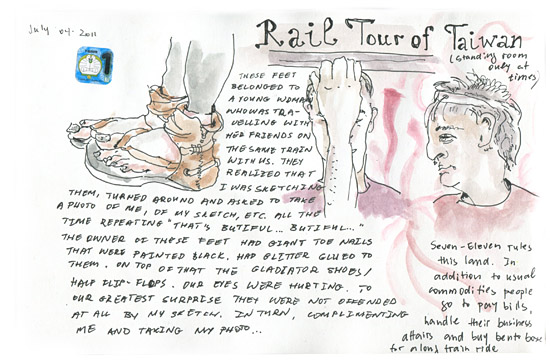 Many thanks to my friend Wayne who used to live in Portland but now is back in Taiwan for giving us a breathtaking tour of Taipei via Maokong Gondola as well as helping me locate my personal god (less metaphysical than it sounds) in one of Taipei temples. For those curious, your deity can be found based on the year your were conceived. 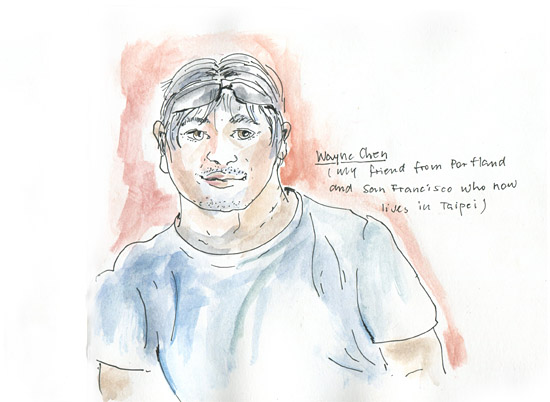 Drugs
As I was drifting in and our of sleep on the last leg of my flight into Taipei I thought I heard a flight attendant announce something that sounded like: "and this offense is punished by death penalty in Taiwan" I thought this was a long flight induced auditory hallucination at the time. Later I found out that I might have heard right, and that the offense in question is drug dealing.
Yes, that seems like a pretty strict punishment for the crime. Of course anywhere you go in Taiwan you see people rolling, selling, and chewing something that is called areca or betel nuts. These drupes comes from an areca palm and are often wrapped in green betel leaves to produce a stimulating effect on the nervous system. People who chew these nuts have bright red to black colored lips and teeth.
Since taxi and truck drivers are often the most common consumers of these nuts the sellers of areca often line the highways. The goods are delivered by very sexily dressed areca girls who wait for their customers inside the brightly illuminated booths or shops and then bring the areca nuts over giving their clients an eye feast as well. 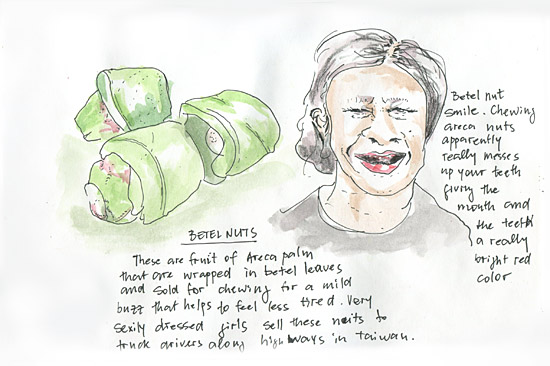 Food and Eating
Food plays a very important part in Taiwanese culture. Most meals are enjoyed family style and might last up to several hours. City streets are filled with intense smells of food and spices. Even temples look like giant cruise buffets–since worshipers typically bring their offerings, plates of food, cake, and fruit and leave it on large platters in front of their favorite deities. 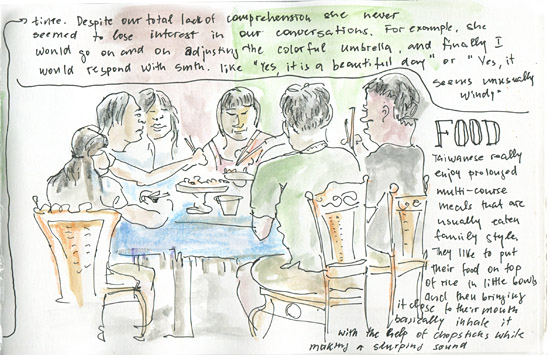 Unlike eating, drinking is not very popular in Taiwan. In fact, one of the few times I had to turn to my guide book during the trip was in order to find a bar, since there were obviously none in plain sight. One of the few bars that was listed in the guide was far enough from where I was staying I needed to take a taxi to get there. Once at the address, it was clear that the business had ceased to exist a long time ago. Fortunately, another bar that only had its yahoo address for a name "beerbar228" (I doubt there were ever 227 bars before it in Taipei) opened just a few blocks down the street. 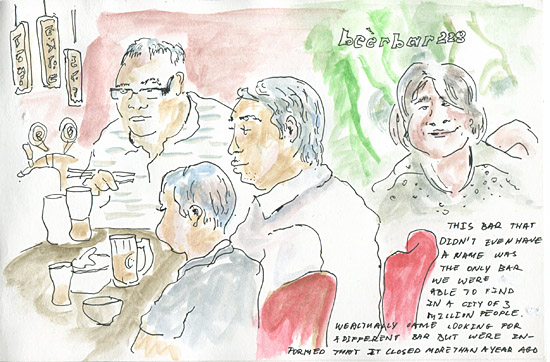 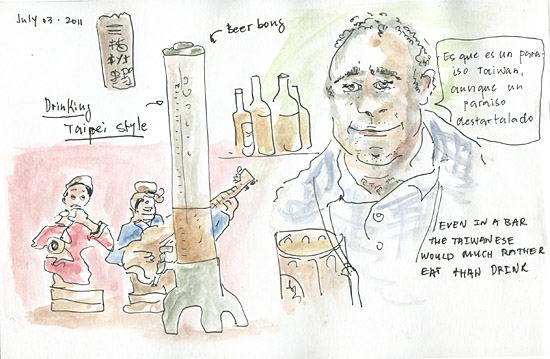 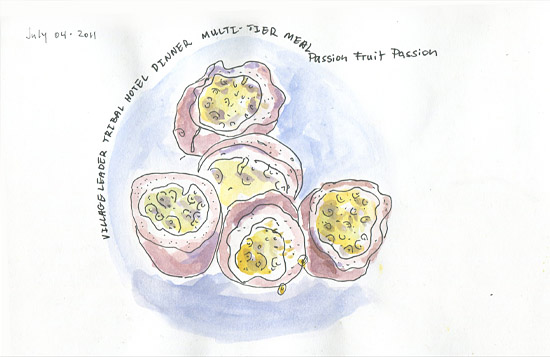 Pretty much anything can be put on a skewer and sold at a night market. 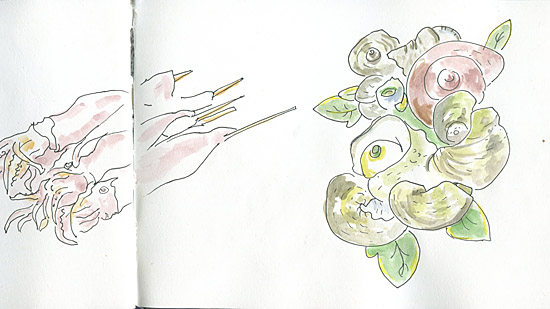 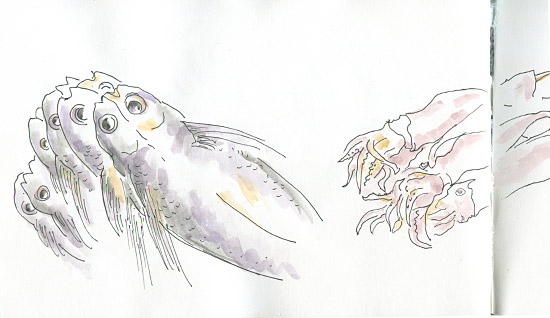 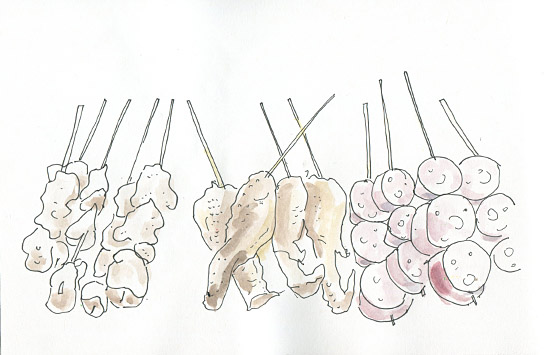 Chiang Kai-Shek Memorial and the National Theater
This magnificent landmark was just a couple of minutes of walking distance from the hotel. It was a perfect spot to kill a few early hours at the crack of down–the early rising was induced by jet lag. Five in the morning the locals are already at their Tai-chi routine to the sounds of traditional Chinese music performed live. 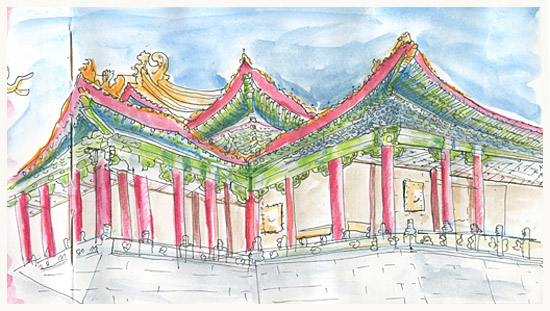 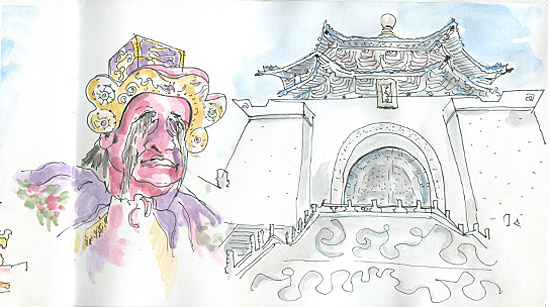 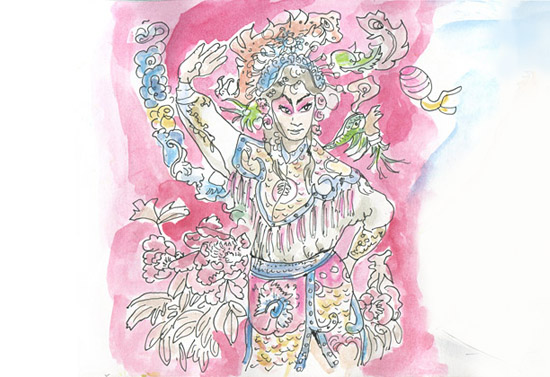 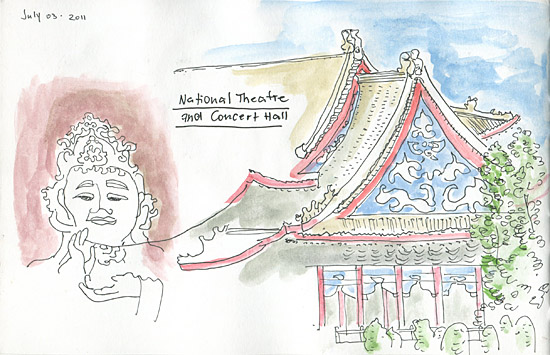 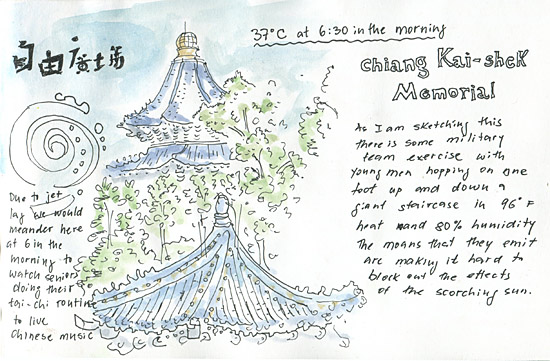 Beaches are extremely crowded but very well organized in Taiwan. Beach goers swim only within narrowly designated areas and cheerfully ride various inflatable contraptions tugged by omnipresent jet skis. At a Fulong beach (an hour and a half outside of Taipei) we saw everyone (several hundred people) all get up and leave at once as soon as a loud whistle announced that the beach time was officially over for that day (around 5 pm). 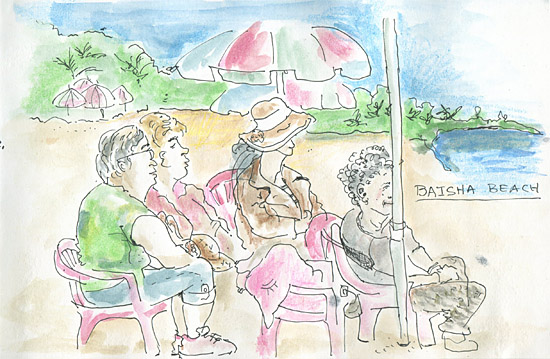 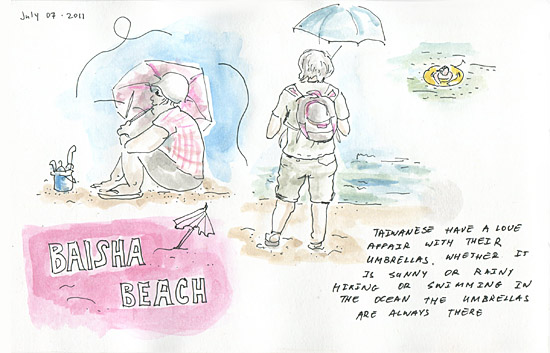 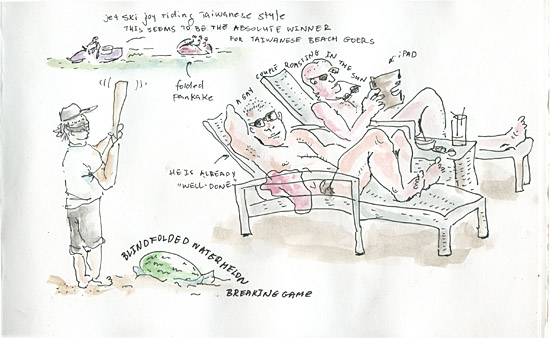 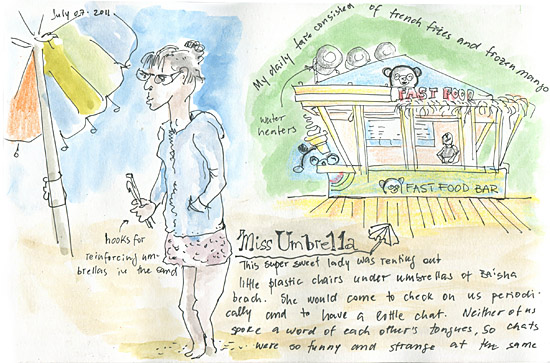 Taiwanese Trains
Traveling around the country on various trains gave me a lot of time to sketch and to enjoy effortless, air-conditioned sighseeing. The east coast towns are connected by the slower but more scenic railroad. The west coast boasts the super modern high speed rail that connects the southern city of Kaoshiung with Taipei, situated in the Northern part of the island in a matter of 2 hours. 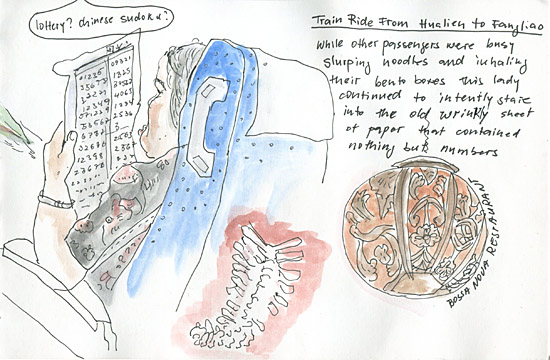 This quote from Jean Baudrillard serves as a perfect prologue for this trip: "Half of joy of travel is to immerse yourself in places where others are forced to live and get away full of malicious pleasure of abandoning them to their fate."

Taiwan was often hot, crowded, and full of intense smells. However, almost anywhere I went I met the most welcoming and friendly people who never hesitated to help me out. 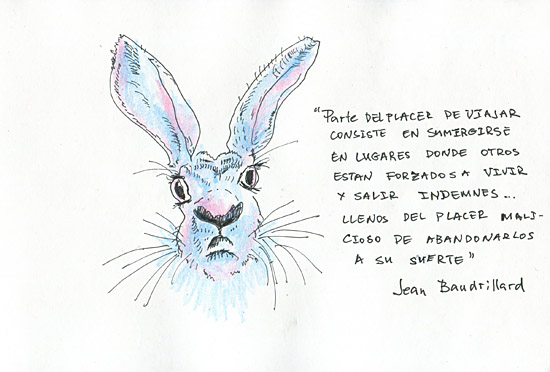