This year's Urban Sketchers symposium took place in Paraty, Brazil. Going back to this beautiful country in order to sketch all day, listen to samba and dance all night while enjoying the company of my favorite artists from all over the world took almost no self convincing.

Brazilians are very fun loving and proud people. On our final approach to  Rio de Janeiro the flight attendant announces that soon we will be landing in “cidade mais maravilhosa do mundo–most magnificent city in the world” and the passengers–mostly Brazilians–silently nod in agreement.

Rio’s typography makes me imagine playful gods throwing rocks and entire islands into the ocean making sure that when they fall they produce the loudest possible splash. The whimsical natural setting is perfectly matched with the same exuberant placement of buildings and entire neighborhoods–from glitzy beach front condos to favelas–everything seems to co-exist together in a chaotic dense harmony. Steeply ascending streets offer breathtaking views of the city below at every turn, and the words of our flight attendant no longer seem pretentious or naive.


The sketch above took three live sessions to complete, mostly because I had to balance myself on a ledge over a ravine in a very precarious and crampy position that would put my legs to sleep every 15 minutes. During the first session I found myself completely alone at this spot when three rough looking men came up to me and towered over me making comments in Portuguese. My initial fear gave way to feelings of endearment when I quickly realized that one of them was trying to give me suggestions on tonal value and composition of the drawing. I pretended to not understand Portuguese and continued to draw in silence. He apparently took it as me following his suggestions, so he bent over and planted an approving kiss on the top of my head.

My first morning in Rio was spent climbing up and down the steep streets of Santa Teresa neighborhood and sketching its incredibly photogenic buildings.

While finishing this sketch over lunch I ran into Suma, a sketcher from the East coast and her husband Michael, who just like I were killing a few days in Rio before heading to Paraty for the symposium.


We decide to spend the afternoon together exploring the city and climbing up the infamous Pao de Açucar.


It is here from the top of this asymmetrical cliff–one of many in Rio that I have the pleasure to witness the most dramatic sunset of my lifetime surrounded by many sunset hunters and their camera phones. I have to draw quickly as it is winter here and the sun drops very quickly behind the purple mountains. The colors are so intense–the glimmering ocean water, white condo buildings, purple mountains, orange sky...

We head back to Santa Teresa for dinner with my new friends and end up at this colorful restaurant called Espirito Santa. 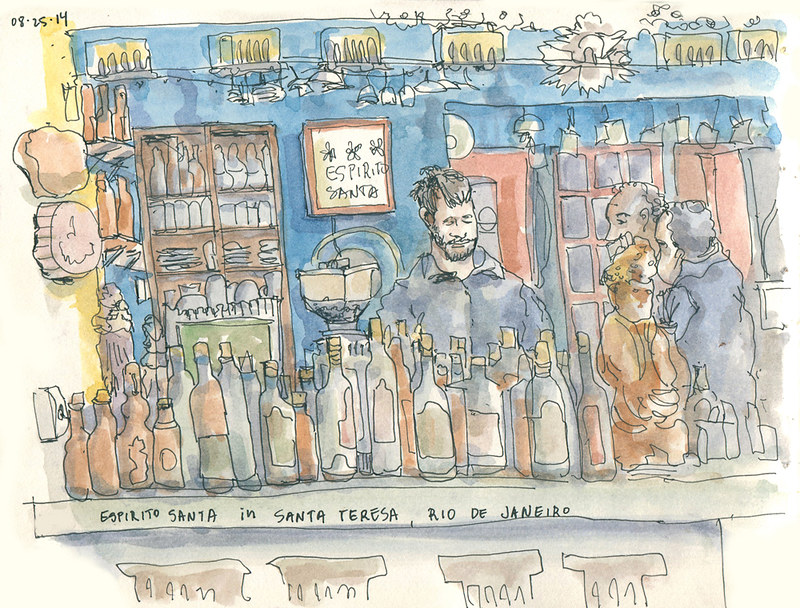 My evening is far from over as the night fills the air with the addictive beats of Samba. I head back to Lapa, the neighborhood where I am sharing a place with two sketchers from Portland, and we decide to pay a visit to one of many venues for live Samba music–Carioca da Gema.


I end up coming back to this venue once again on my way back from Paraty, this time with Norberto Dorantes from Argentina and William Cordero from Costa Rica.


One of Rio's tremendous appeal is its amazing diversity and seeming lack of boundaries between affluent neighborhoods and favelas or slums, where its less fortunate inhabitants reside. I have to say that sketching a favela was already pretty high on my list, although I realized that going there by myself was probably not the smartest move. However, that is exactly what happened as the next day I found myself in Santa Marta Favela with my sketchbook just as the sun was beginning to set.

Unfortunately, soon it was time to say good-bye to Rio and head to Paraty. Here is a partying sketch of Portuguese style building across from our apartment as we are waiting for our ride.

Fortunately, only a few days later after the USK, Paraty is over I am back to the city of samba.

During lunch with fellow sketchers in Rio we discuss being robbed and mugged while traveling. Little do I realize that as I blissfully enjoy my lemon juice my checking account is being drained of cash by someone who skimmed my card from an ATM in Rio earlier that week. 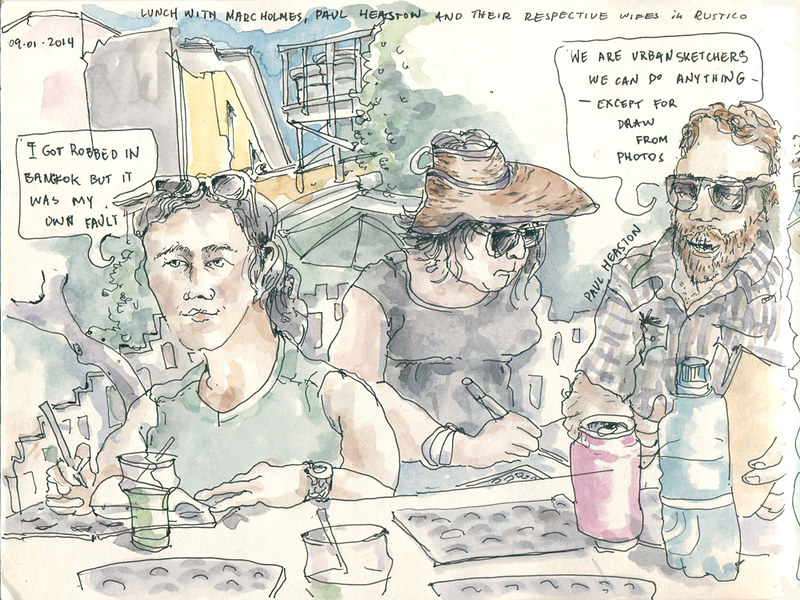 As I sketch the sunset over Ipanema with hundreds of fellow sunset hunters a police helicopter is hovering over us, low in the sky. Some young Brazilians sit next to me and watch me sketch and then offer me to smoke marijuana with them–I politely decline. A huge wind storm comes from nowhere and literally blows everyone off the beach. People run as sand, trash and coconut shells are flying in the air... Every night as the sun sets over the purple mountains people applaud. Good job, universe–the celestial bodies are still moving just fine!