Just a day before I arrived in Mexico tens of thousands of people took to the streets of the capitol to protest the actions of the corrupt and incompetent government of Peña Nieto. After years of violence, beheadings, and disappearances related to the so called war on drugs Mexican people have finally had enough. The public anger has reached its boiling point after the disappearance of 43 students from Ayotzinapa. The students from a teacher's college showed up for a peaceful protest that happened to coincide with an event organized by the mayor of Iguala. The mayor and his wife had known connections to drug lords. They ordered the local police to take the students to the drug gangs who executed them. Their remains have never been found. The search for the missing students went on for weeks and in the process other mass graves have been uncovered.

Number 43 became the symbol of the public discontent and disgust with the open alliance between the government and organized crime. In reality, more than 23,000 of people have disappeared in Mexico since the beginning of the war on drugs in 2006. The outrage over the alliance of the Mexican government with the drug gangs and the anger over mishandling of the situation has resulted in mass protests all over Mexico.

On November 27 I sketched one of the many protests that was taking place in front of the Palacio de Bellas Artes in the historic center of the city almost two months after the disappearance of the 43. Emotional speeches were punctuated by the periodic chants "Vivos los tomaron, Vivos los Queremos" "They took them Live, We want them back Live", "Justícia" "Justice", "Viva la Lucha", "Long Live the Fight" as long as counting to 43. The women next to me were making memorial ribbons shielded from the sun by umbrellas. 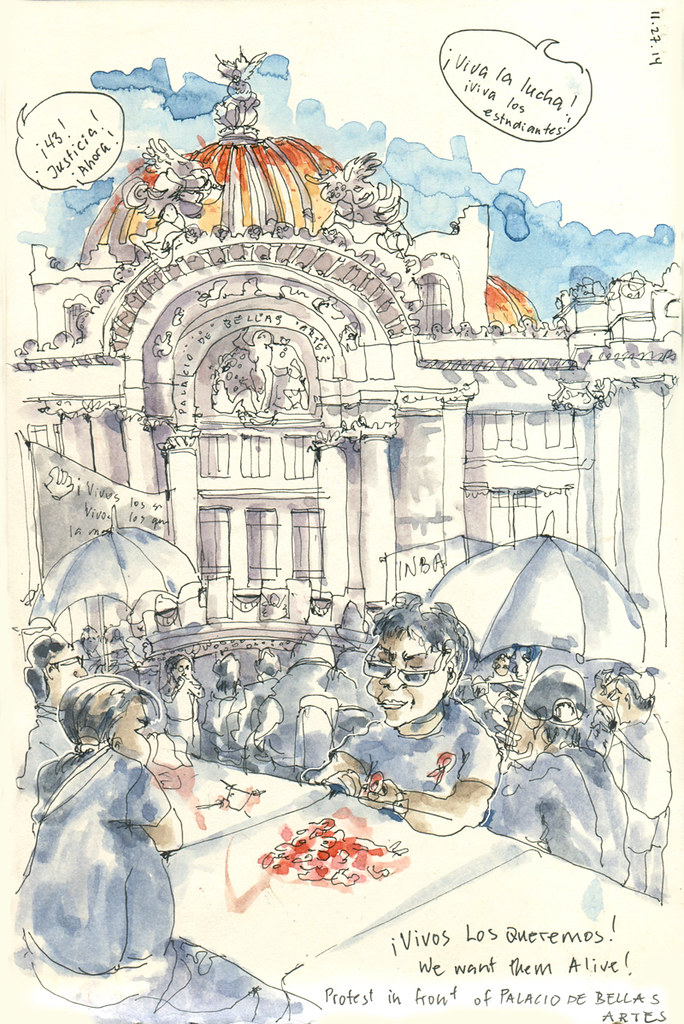 Meanwhile, the twice-a-day pompous ritual was happening nearby at the Zócalo square. Every day at dawn and dusk several trucks full of camouflaged soldiers appear  on the square. They proceed to march out to the center of the square to raise or lower the giant Mexican flag. Residents of nearby hotels and residences have to endure the sounds of military marches under the windows as early as 6am in the morning. 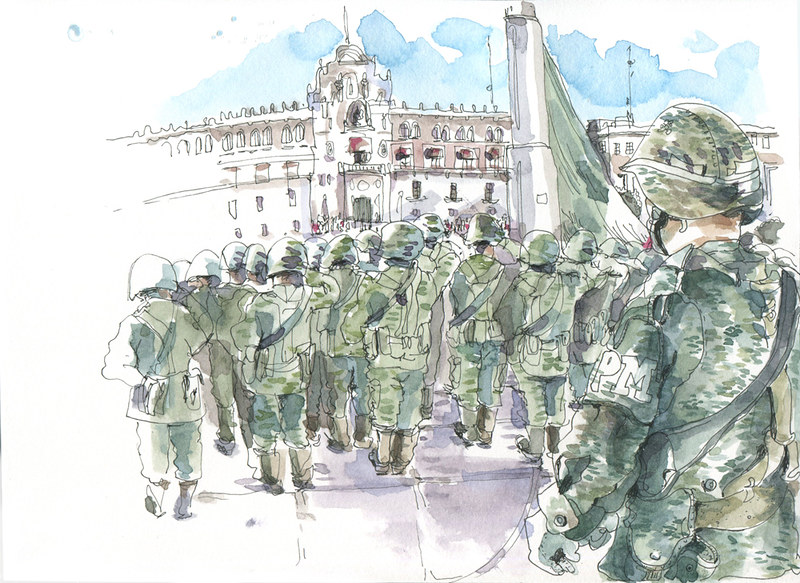 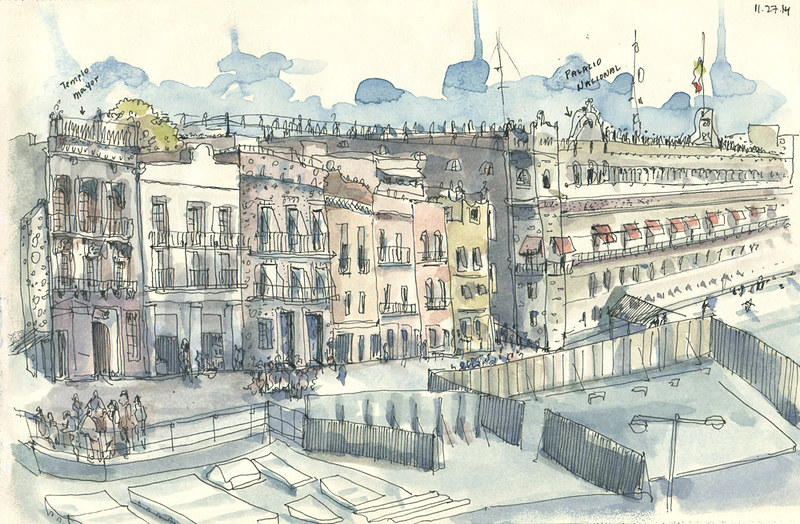 In order to capture the vastness of the Zócalo square Juan and I climb to the roof top terrace of one of the nearby hotels. It is Sunday afternoon , and we arrive just in time for a lavish multi-station all-inclusive buffet. The view was spectacular but in order to sketch we had to become paying customers. Juan took one for the team and settled down for some serious eating. I dove right into the sketch trying to capture all of the activity below me. From here people seemed like ants marching in circles around the perimeter of the square. One of the sides of the square is formed entirely by Palacio Nacional which stretches for 200 meters.

As Juan was progressing through courses of soups, shrimp cocktails, and tacos al pastor I was making my way through the endless balconies and facades of the Palacio Nacional.

Coyoacán is a somewhat nostalgic part of the historic center of Mexico City. Full of bookstores, art galleries, ice cream parlors and cafés one is reminded of 19th century bohemian Paris–the feeling is intensified by carrousels, clowns, show shiners, and the omni-present street organs players, who use one hand to turn the handle of their music box and the other to stretch out asking passer bys for offerings (limosna). As I settle down for a sketch at the Plaza Hidalgo I am approached by a poet, a musician, and some students who are interested in what I am doing.

I sketched this shoe shiner who was sipping a smoothie offered by a girl with her face painted as a festive calavera skull. 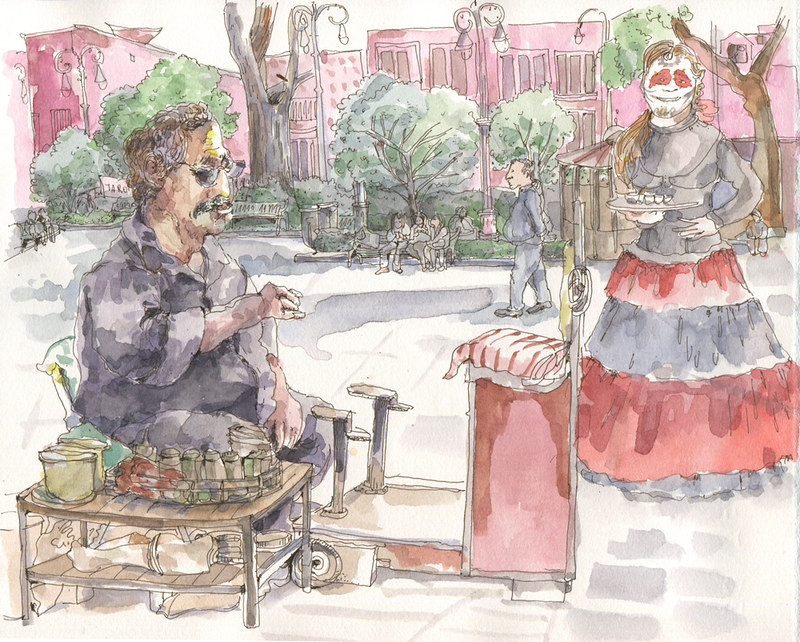 Next to me this street cleaner was also taking a break. 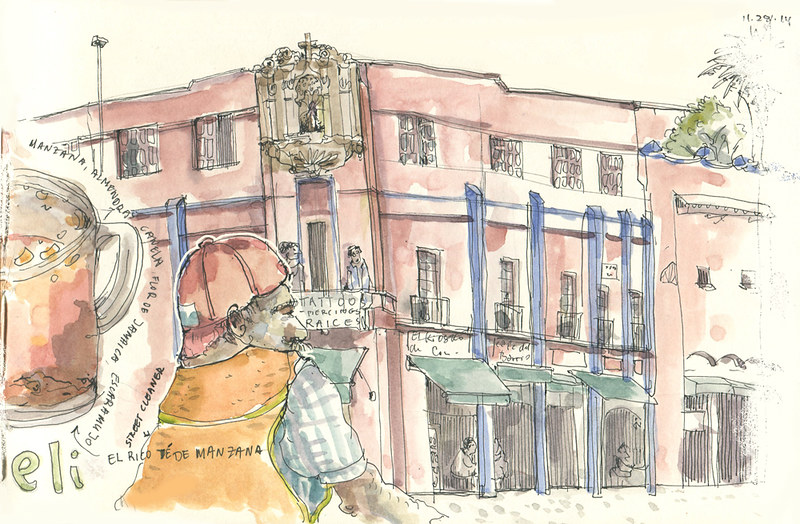 I duck into one of many inviting cafés for a cup of fruit tea. My attention is immediately drawn to the face of an elderly señora in the company of two men. As men chat she sits completely still, not saying a word or changing her facial expression for even a minute, tired sad eyes staring into space. 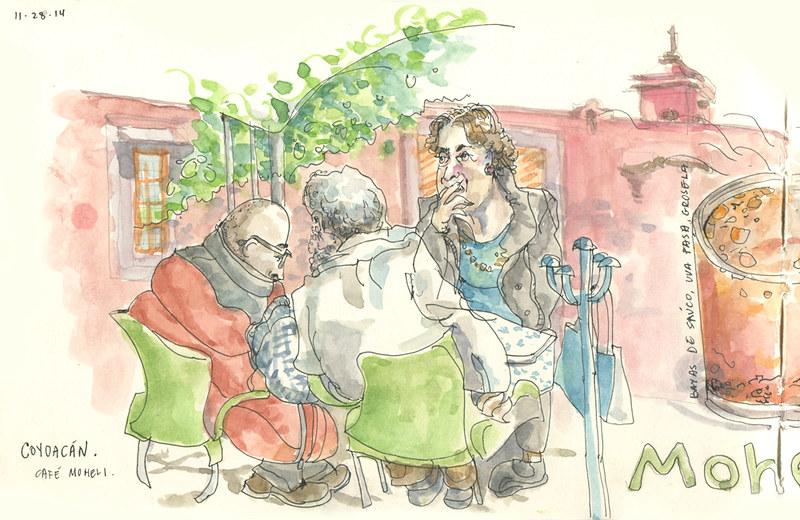 Juan Antonio and his friend Geraldine join me for lunch in Coyoacán's Cerverceria de Barrio. Juan is craving some of their famous Almehas Chocolate. I explore the intricate contents of these shelled delicacies and draw them before they quickly disappear off the plate. Geraldine is a delightful chatty young woman from Cuba who has been living and working in Mexico City for the last few months. The conversation quickly turns to politics. "With everything that is happening in this country I love Fidel (Castro) more and more," says Geraldine. "What do you prefer, a complicated beard or an incompetent forelock?" referring to the hairstyle of the current Mexican president. Geraldine says that what initially attracted her to Mexico was better opportunities and more freedom. However, she misses the sense of a more humane society, advanced medicine that are parts of living in Cuba. 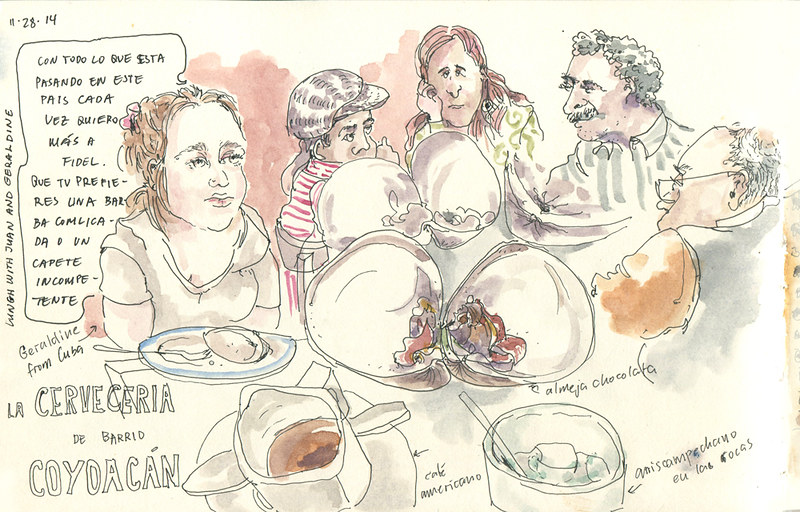 This mostly pedestrian street starting near Zócalo square belongs to the street vendors. Various cadences of street sellers calls coming into a roaring chorus and magnified by the narrowness of the street lined with tall buildings is overwhelming at first but then fills one with joy of being part of this dense human river that flows, buying and selling, offering and bargaining, gazing and being watched. 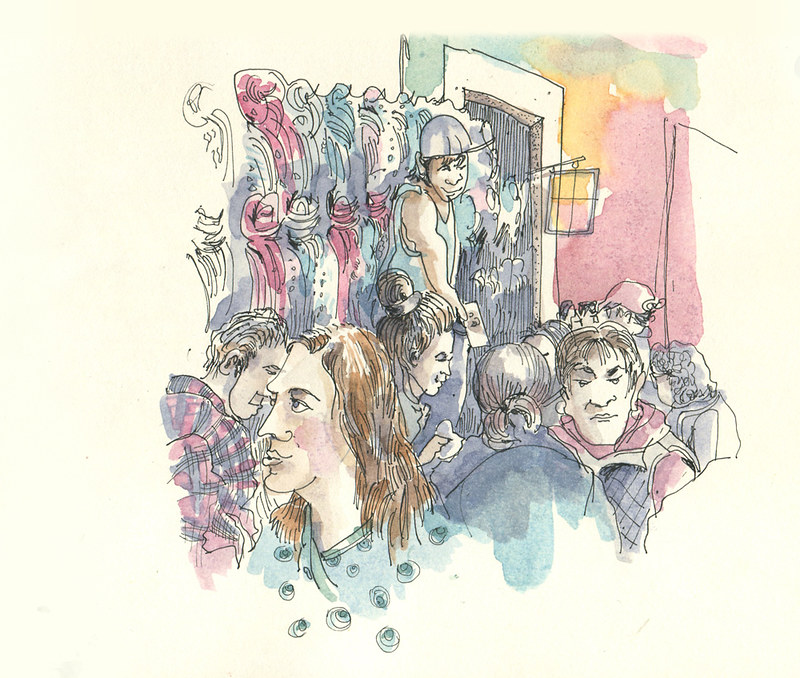 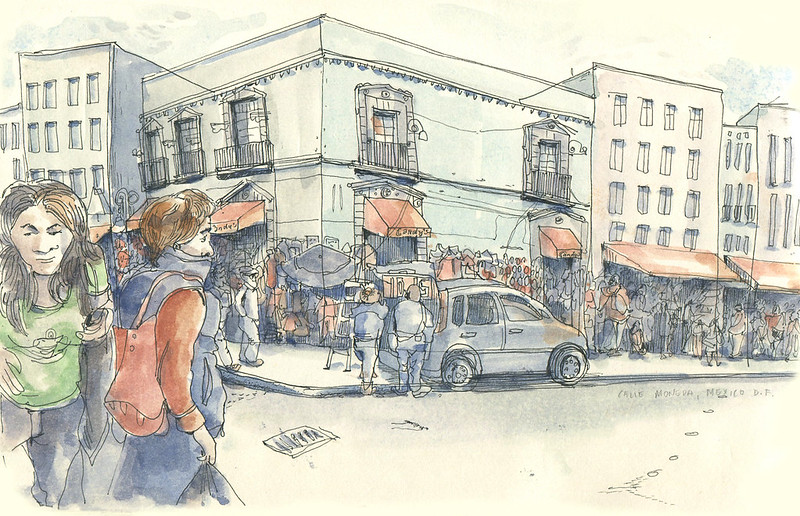 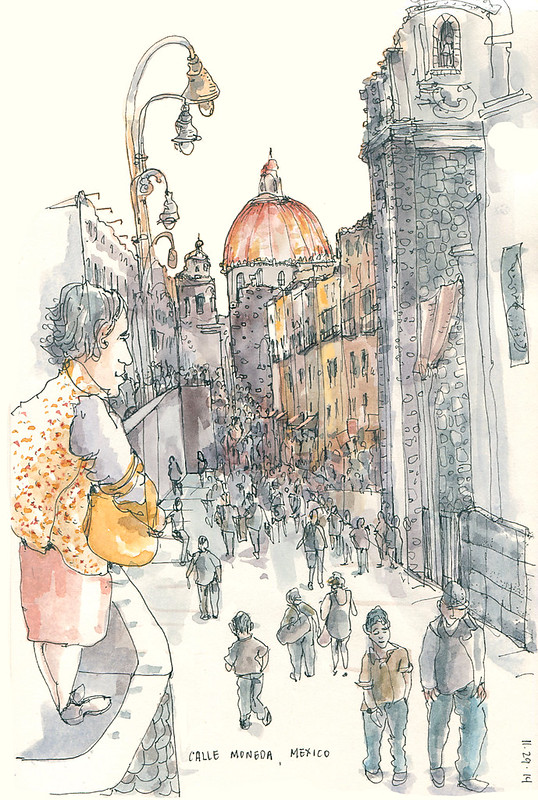 As the minutes of winter day light are running out the street witnesses a new type of merchandise–street walkers start to appear offering themselves to a willing buyer. 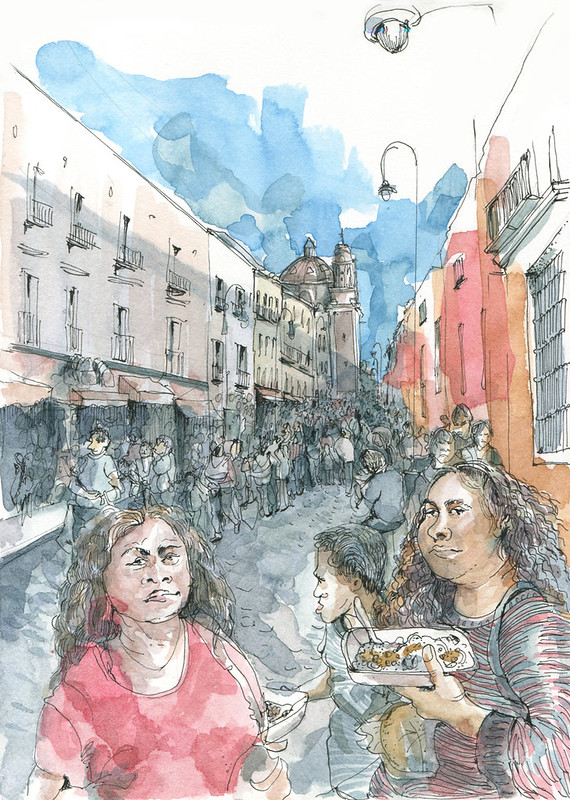 A visit to Mexico City would not be complete without an evening spent on Garibaldi square–the world's mecca of Mariachi bands offering serenades. A song typically costs around 100 pesos. There are also offers of toques–electrical shocks administered to the especially daring and drunk for around 70 pesos. 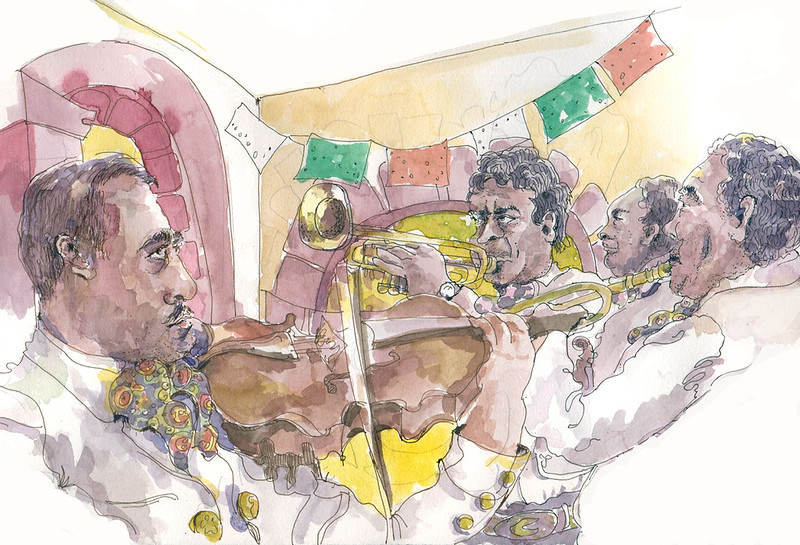 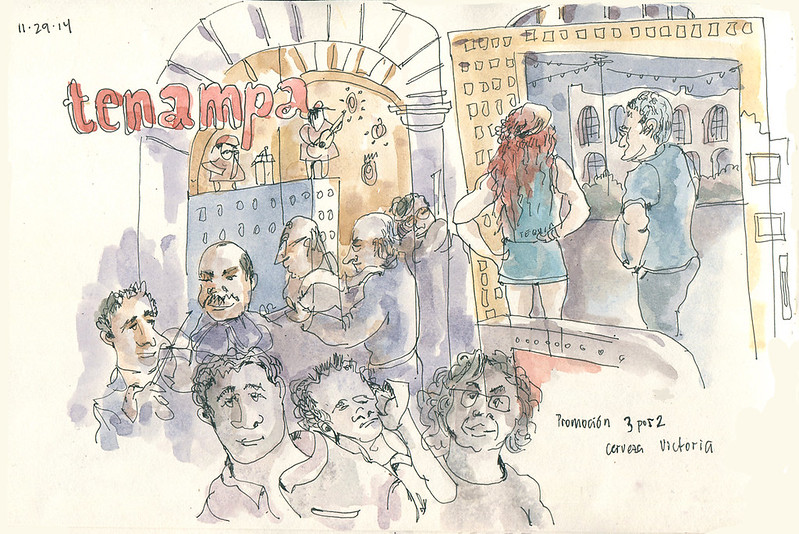 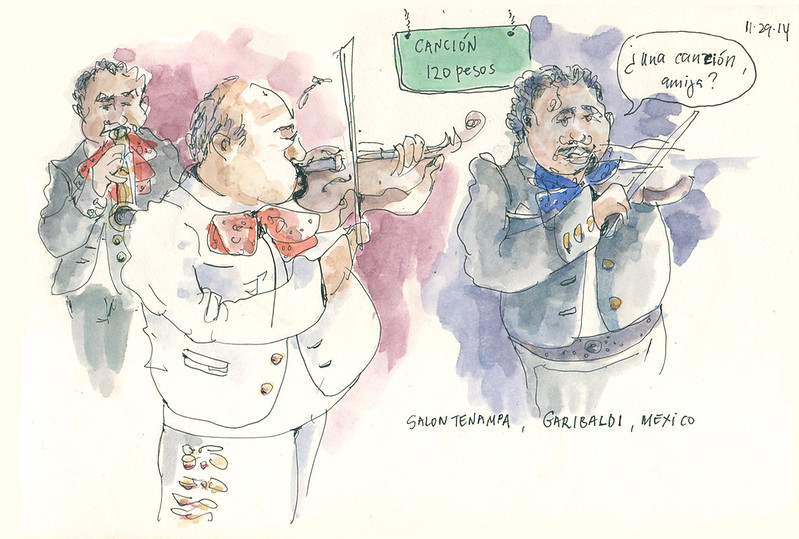 Salon Tenampa is the oldest bar on the square that has been around since the early twenties. We settle down with a delightful group of friends to take in the ambiance, enjoy tequila and mezcal and listen to the mariachis. 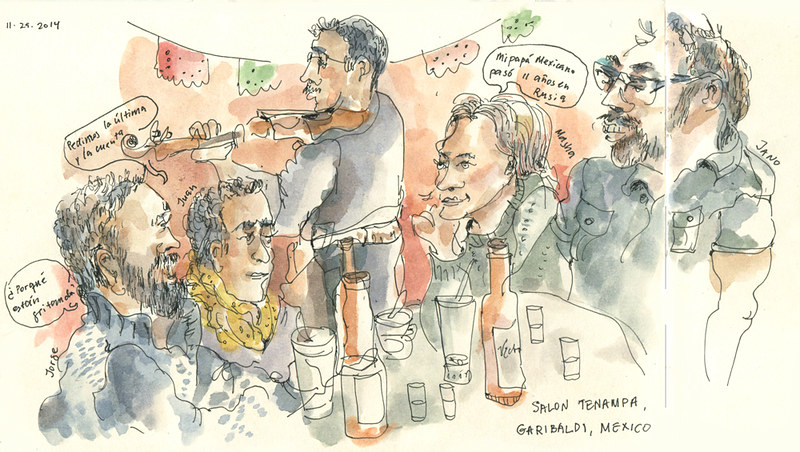