It is hard not to appreciate the fact that we are a train ride away from another large West coast city to explore–Seattle. It is a bit like Portland's older, more conventional sibling but with its own brand of alternative culture, hipsters, amazing food scene, and stellar public transportation network.

An Amtrak commuter train did not fit out schedule which meant that we had to board on a more dated and, as it turned out, more drama filled Coast Starlight. The tired train finally pulled up over an hour late to Portland's Union Station.

The passengers were immediately greeted with the dose of reality mixed in with a good share of drama as a train attendant who sounded like Garrison Keillor made an announcement over the loud speakers: "Good Evening folks, our train is running late. We do not expect more delays but if we do, we will let you know. We are grossly understaffed. The snack bar will be closed. The restaurant might take in any hungry travelers after our reserved travelers dine, in case we still have any food left"

We did have a chance to "enjoy" the meal in the train's restaurant, although most of the options on the menu were no longer available. Real porcelain plates were replaced with plastic a long time ago. White linens were covered with sheets of white paper curling up on the corners and well greased by the elbows around the edges.

We were seated at the same table with an executive from Olympia and his brief case. He turned out to be a very pleasant and flexible companion. Here he is enjoying his side salad after the the restaurant told him they were out of the first 4 options he tried to order. 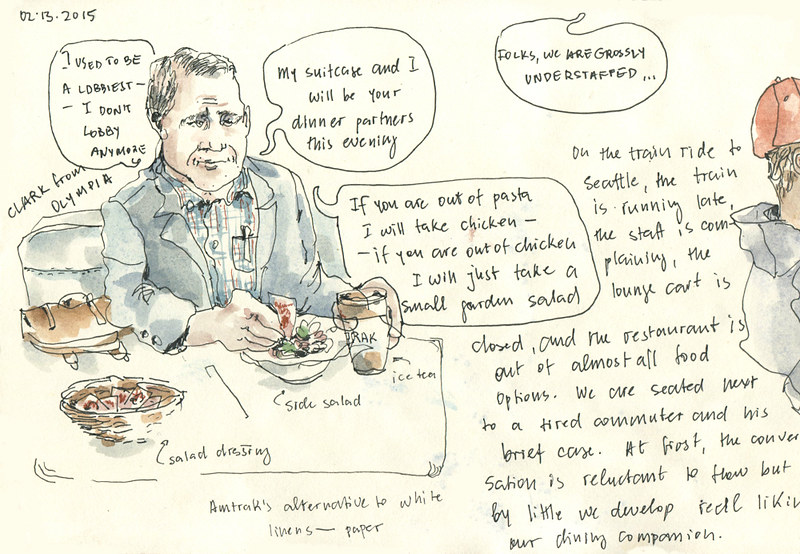 This is a very popular breakfast spot next to the Seattle's Pike Place Market with indulgent drinks and exhaustive combinations of salmon and eggs to choose from. Today being Valentine's day and Saturday the place is filled with couples treating themselves to romantic breakfasts washing them down with mimosas, bloody mary's and white chocolate mochas while waiters seductively whisper that day's specials into their ears. 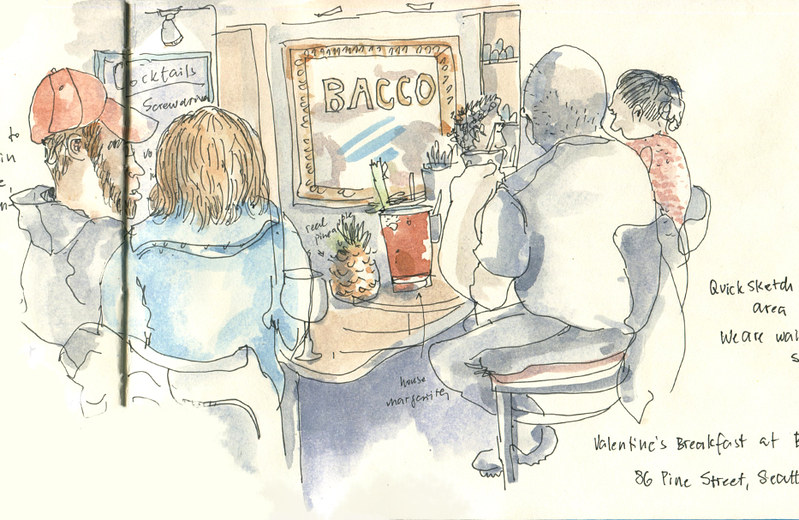 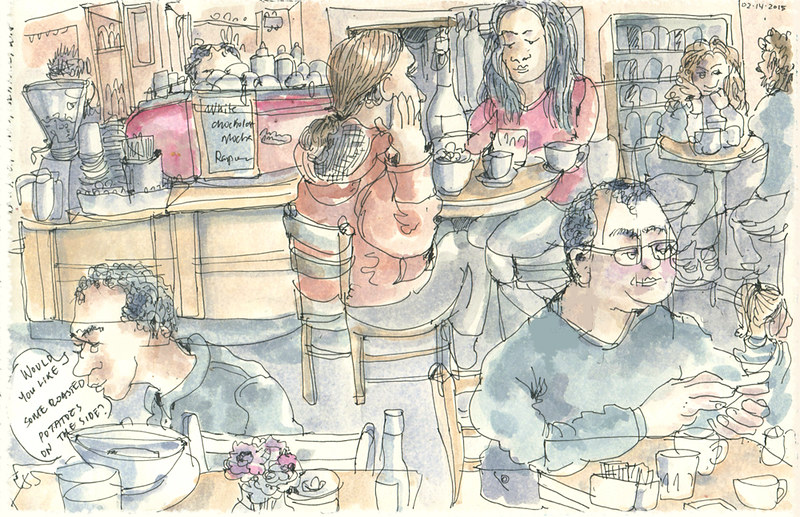 It is not every February weekend, north of 45th parallel that you get to spend many hours outside in the sunshine, sketching people sun bathing and playing frisbee. After a long stroll along the waterfront I settle down for a sketch of the city scape South of me. 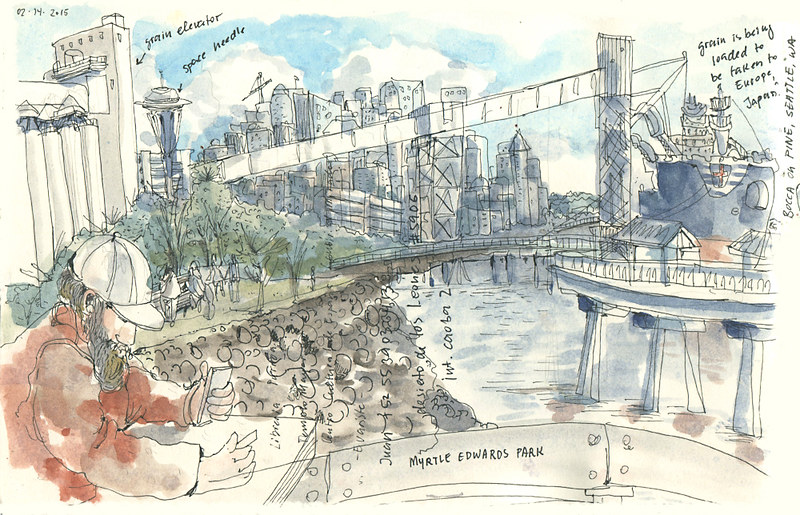 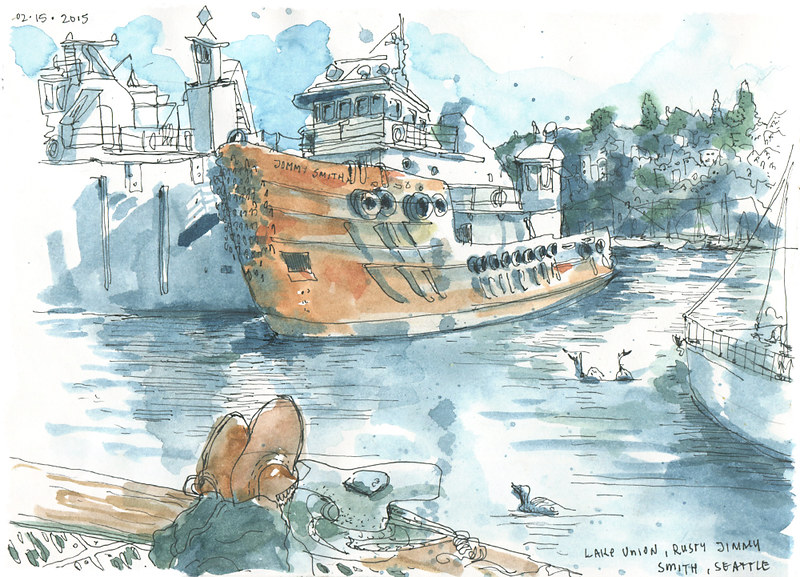 Instead of sketching a giant Lenin's statue that graces the Fremont neighborhood in Seattle I sit down to sketch more couples in the midst of indulging in this city's exquisite food offerings. 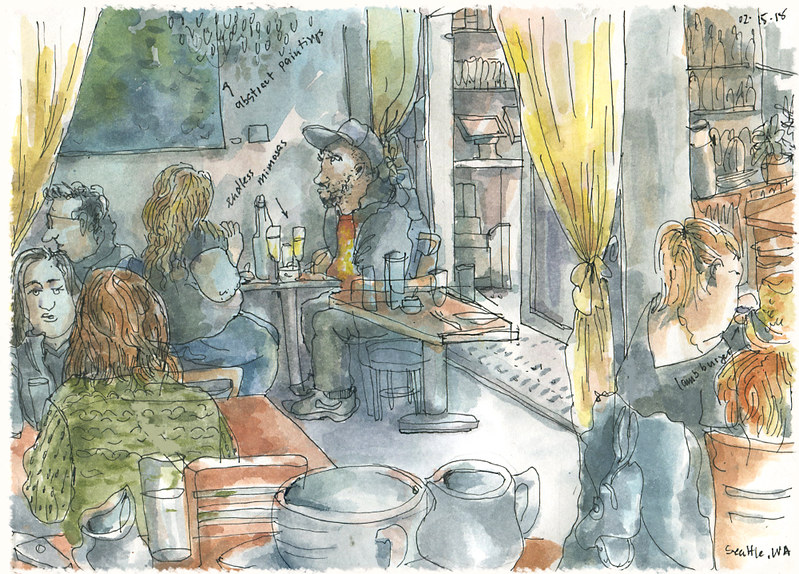 Here are all of the courses that are part of the prix-fix Valentine's day brunch starting with something called Amuse Bouche of blood orange sorbet drizzled with salt and olive oil to wake up the taste buds. 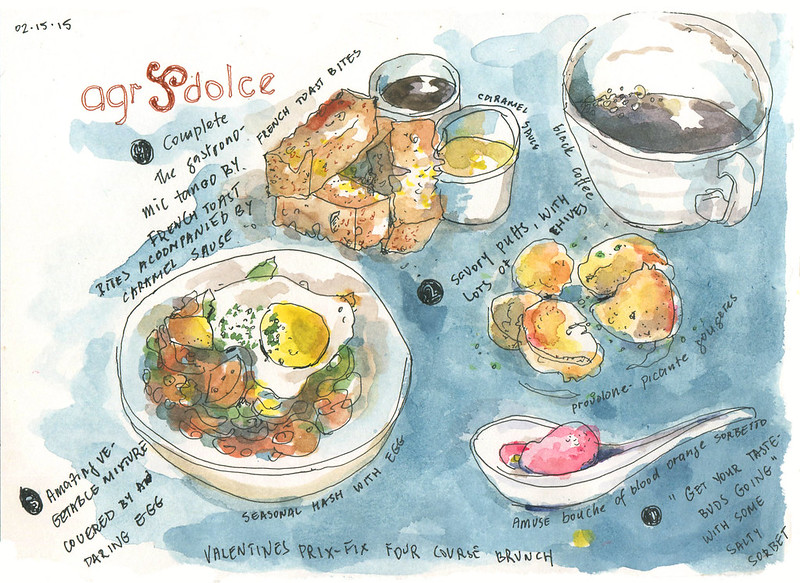