This past July a few hundred of sketching enthusiasts headed to Singapore for the Sixth Annual Urban Sketchers Symposium. Singapore–a tiny city state in SE Asia is famous for its hot weather and exotic policies, such as a ban on chewing gum. Even though SE Asia cast its magic spell on me several years ago, initially I was not particularly enthused by the location of this year's symposium. The few things I heard about Singapore were mostly that it was modern, clean, safe, and affluent. Little did I expect to fall in love with its amazing ethnic and religious diversity, helpful and friendly people, harmonious combination of old colonial neighborhoods and modern architecture, and convenient location to pretty much anywhere else in South East Asia.


The people I met in Singapore seemed really aware of the world around them. Usually, traveling outside of the US I do not expect people to know where Portland, Oregon is located. When explaining where I am from I often get a puzzled look when I say "Portland." Moved to establish some sort of common ground, I start connecting it to more famous surroundings: "It is north of California." More puzzled looks. "California is home to Hollywood." That's how some people I meet during my travels might end up thinking I live in Beverly Hills.

By contrast, most people I talked to Singapore have heard of Portland and were even familiar with its tagline "weird."


Singaporeans I met tended to be very self aware as well. When asking visitors what those thought of their country they often rushed to reply themselves: "It is hot, right?" "It is expensive, correct?" "We have two seasons–hot and hotter here" or "We have two national sports–eating and shopping here". I would also add the selfie stick photography to the list of national sports. There is even a coffee shop that offers its customers beverages with their selfies plastered to the top. 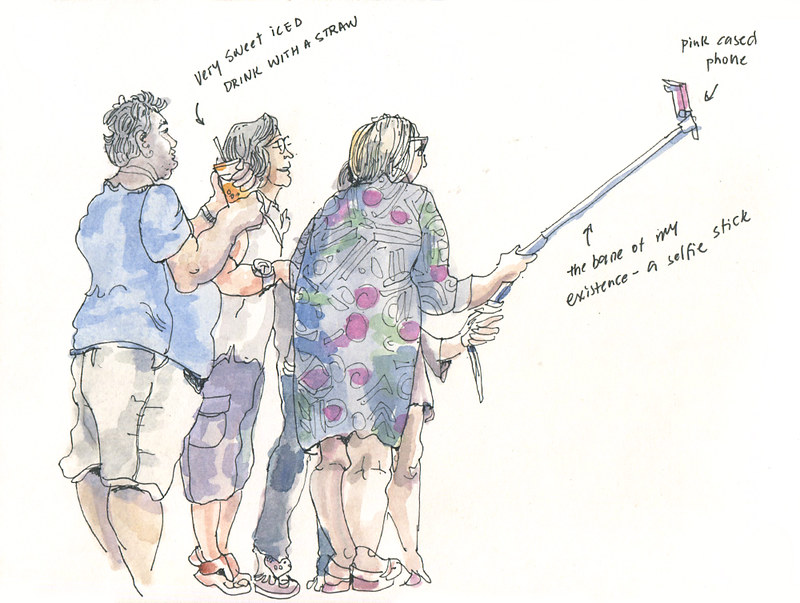 Since I am not from Beverly Hills I actually didn't stay in the Raffles hotel that hosted many celebrities since it opened in 1800s.


My hotel was centrally located on Purvis street surrounded by various landmarks like the historic Raffles Hotel (above) and colorful neighborhoods such as Little India, Chinatown, Arab neighborhood. 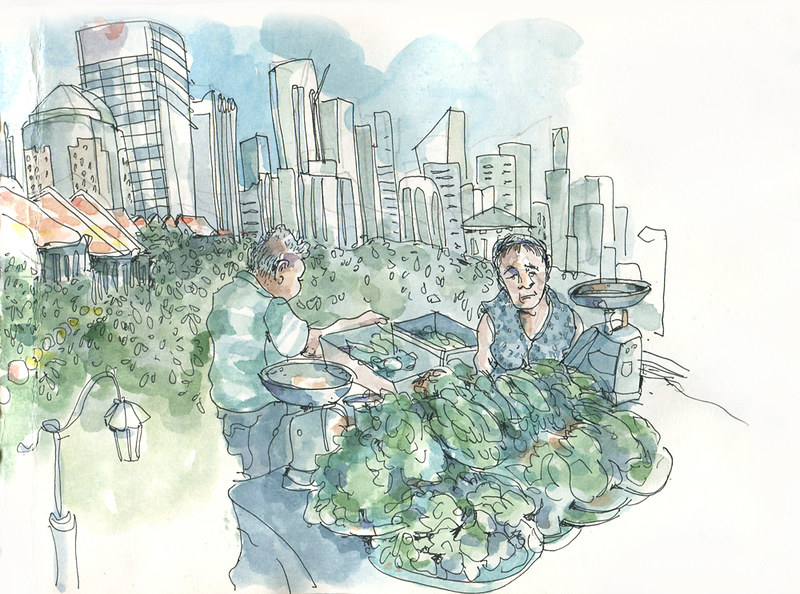 The highlight of my time in Singapore was visiting and sketching Sri Krishnan Hindu temple. I ended up going back there for three days in a row, sketching the elaborate entry and its hilarious attendant, its facade and finally detailing the elaborate ceremony dedicated to the Hindu god–Garuda. The ceremony was one of the most moving religious experiences for me up to date–the feast for senses with its bright colors, incense burning, live music, hours of chanting. Buckets and buckets of milk, honey and spices were poured on a statue of Garuda as part of the celebration. Some sketchers and I were even invited to share the meal with the devotees at the end.

As I was sketching the entry into Sri Krishnan locals would stop by to watch, offer me food or drink. One young woman even gave me a clip to hold the pages of my sketchbook down.

Traveling in South East Asia one is constantly exposed to a variety of unusual foods and food smell amplified by heat and humidity. Yet, at no time is your stomach more alarmed by something unusual as during breakfast. Watching people slurp their noodles at 6am in the airport was turning my stomach but only a few minutes later I found myself ordering and eating the spicy brothy laksa–traditional breakfast soup in this part of Asia. 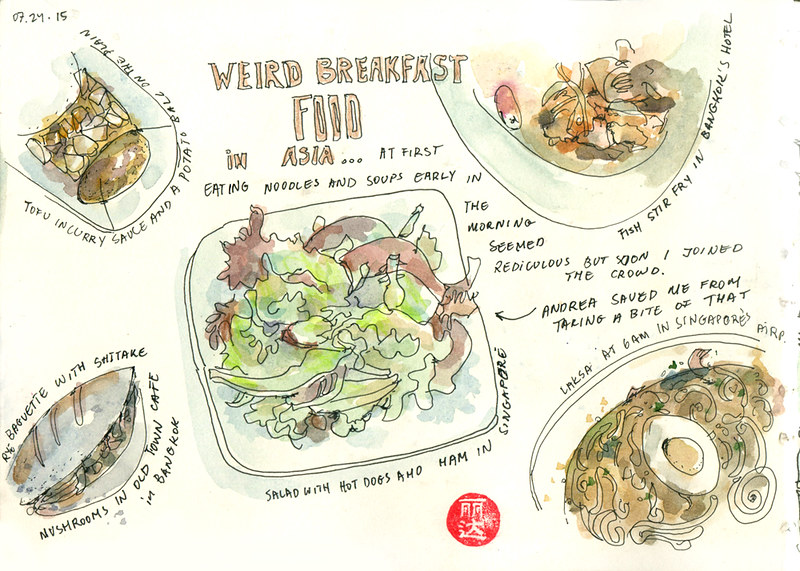 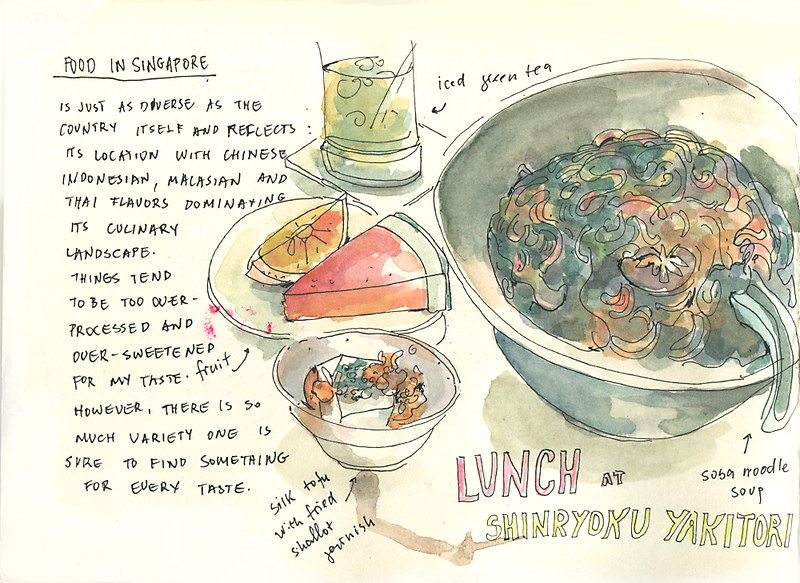 
This time almost 400 sketchers from 36 countries gathered in Singapore. Three days was not enough time to meet everyone, look at their sketchbooks, and really revel in the fact that there are so many amazing talented people in the world who share my passion . I met or reconnected with some amazing artists from Honk Kong, Tanzania, Israel, Korea, Indonesia, Malasia, and Australia. I also got to hang out with some of my favorites from the Spanish speaking world–Miguel Herranz from Barcelona, Norberto Dorantes from Buenos Aires, Inma Serrano from Sevilla.

As always, sketchers' support teams–husbands and wifes who travel with their significant others and entertain themselves by sight seeing for a few days are a lot of fun to meet as well. Here are two sketchers' husbands I met in Singapore. 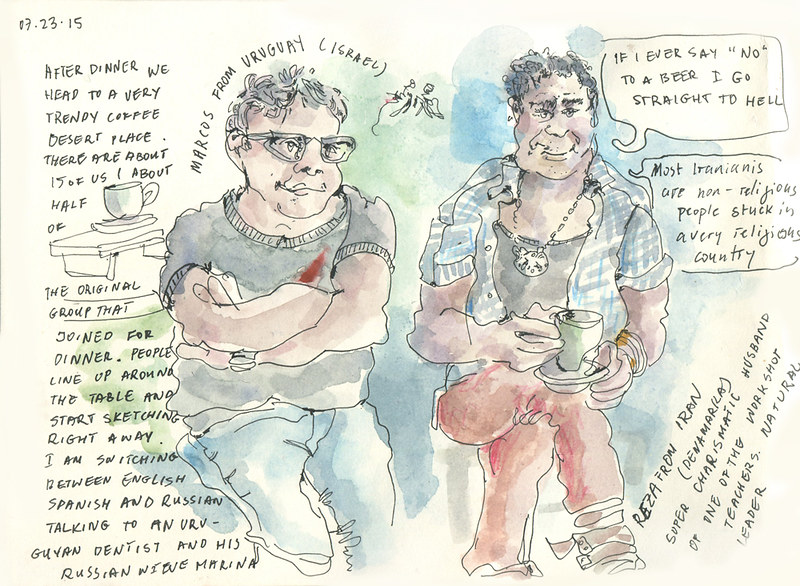