Late July of 2016 I traveled to Manchester's Seventh Urban Sketchers symposium to reconnect with some of my favorite artists from around the world, sketch from morning till dawn, and present a couple of lectures on my favorite subject of Travel Sketching.

Manchester is a historically industrial city that is majestically dressed in brick and blanketed in moody lilac skies. It undeniably evokes the spirit of industrial revolution in Europe, although the modern city masterfully combines the old and the new.

I stayed in the Gay village on Bloom street which meant that my jet lag was nursed by the sounds of the restless partiers on the nighty basis. Here is a sketch of the corner across from my apartment with the street cleaners scrubbing the street after another wild party evening. 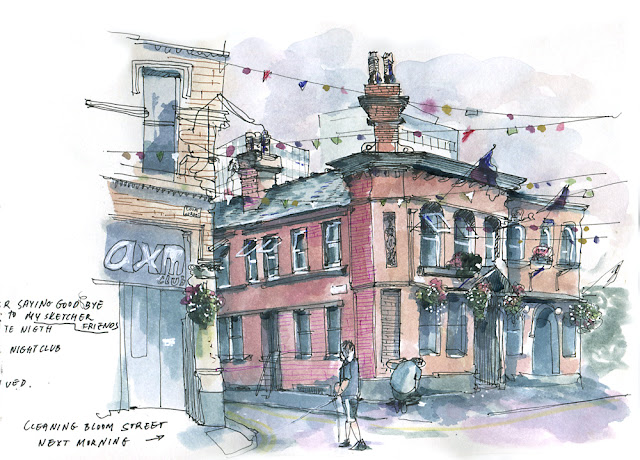 Lancaster house dominates the downtown skyline. Formally a packing and shipping warehouse it currently appears to serve as a luxury apartment building. 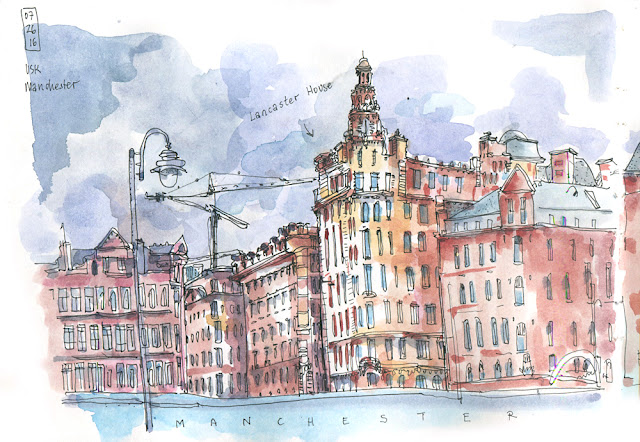 "Drink and Draw" is one of the oldest standing traditions at the Urban sketchers symposiums. I am always amazed and amused  to have a place completely inundated by people feverishly drawing together and such was the daily experience at the classic, brightly colored British pub Peveril of the Peak.

Another lovely tradition is going out for dinners with a large group of sketchers.   This time we picked Tiffan–an Indian restaurant as our home base and ended up going there for three nights in a row. By the end of the symposium our waiter already knew what we were planing to order. As usual I was hanging out with the group of Portuguese and Spanish speaking sketchers–all of whom are incredibly talented and sweet. 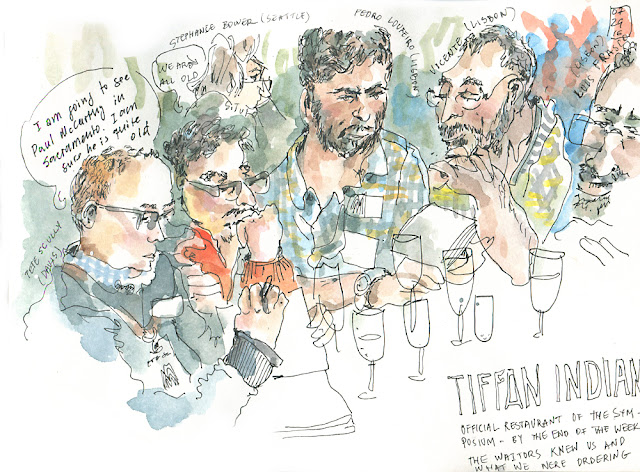 The three days of the symposium always fly by way too quickly. Fortunately, the trip was still not over and I had a few days in my favorite London ahead of me.

I met up with my old friend Isabelle Perez, and together we explored and enjoyed London. I took Isabelle out for some Pho–British style, a serving of which almost made her small French stomach explode.


Approaching Big Ben and the Parliament we witnessed the Afrikan Reparations march. 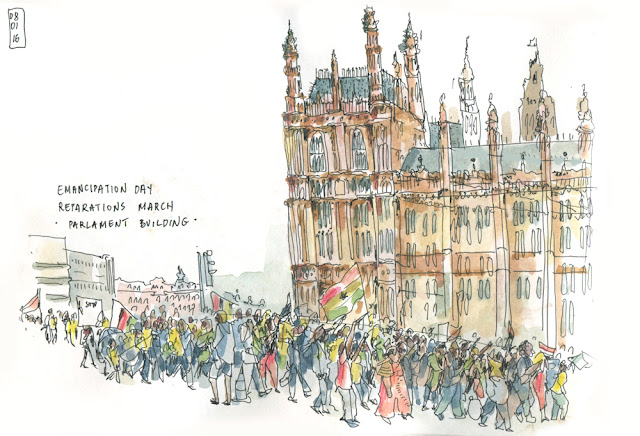 Wet and cold London weather pushes us indoors. Fortunately there is no shortage of museums with free entrance.  First we duck into Victoria and Albert Museum and then pay a visit to the Natural history museum, which not only boasts an amazing collection but is also housed in an impressive space.

The visit to England would not be complete without the pompous affair of the afternoon tea.