The Freight Train Engineer For The Union Pacific Railroad

My short visual reportage about Mark V–single dad by day, freight train operator by night, and tuba player everywhere in between won the second prize in the Sketching Work Design Project put together by the University of Western Australia. I am very honored to be selected, especially after reviewing the exceptional caliber of other entries.

Check out the online exhibition here.

Mark has worked as a train operator for the last 39 years. He is planning to retire in the next 18 months. He loves railroads and feels like he is a twelve year old boy going on 65 when he climbs into a locomotive. He says that running trains in the Pacific Northwest allows him to enjoy some of the most breath-taking scenery. He even derives simple pleasure from warming his breakfast sandwich on a little metal space heater by his feet, worn and gritty from years of usage. 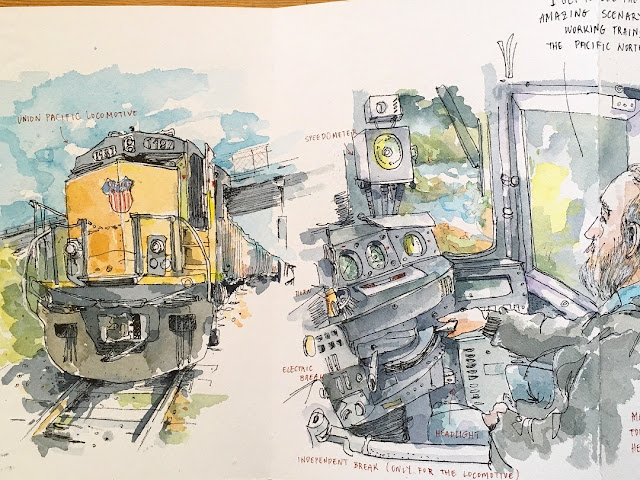 In order to become a train engineer one has to go through 6 months of intense training, plus some long hours in a simulator. Train operators need to be in tune with multiple forces of physics when they run a giant freight train pulling or pushing multiple cars. A lot of times these trains deliver some of the most poisonous materials known to human kind, and an accident could lead to an ecological destruction and loss of life on a catastrophic scale.

Another aspect of this job that comes up in training is the tragic fact that people use freight trains as tools of suicide without thinking about the consequences for the operator. “In training they tell us that on average you could expect to have up to seven incidents involving suicides or death in the course of your railroad career” says Mark with a heavy sigh. “You have no steering, and the train like this is impossible to stop in time, so you just close your eyes and wait for a thump” 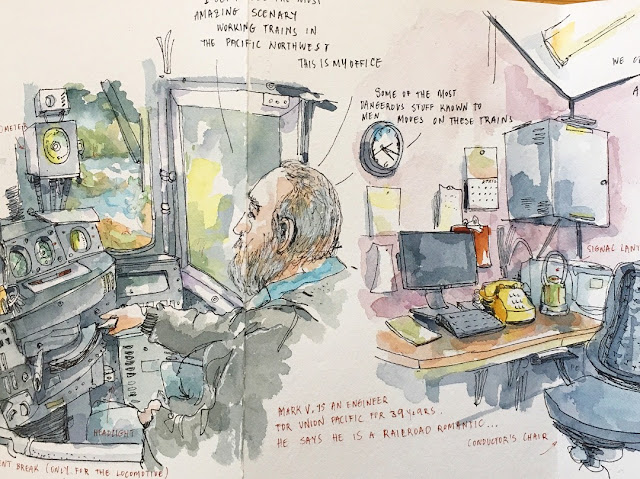 An accident involving a drunk man climbing over the train that Mark operated in July of 2003 lead to Mark’s long struggle with PTSD (post-traumatic stress disorder). The man accidentally fell under the train when it started moving and lost his leg. Fortunately, Mark noticed it and was able to save the man’s life.

Otherwise, Mark loves all aspects of his job, including crazy night shifts. He said that working nights allowed him to spend more time with his daughter when she was little. Mark’s wife died when their daughter was only 3 years old. Mark would play tuba gigs in the evenings, take three hour naps before reporting for his night shift at midnight. He would sleep another three and a half hours in the morning after finishing his shift and would help out in his daughter’s school and spend afternoons with her. He says that none of the stay-at-home moms would believe that he was a single dad working two jobs. 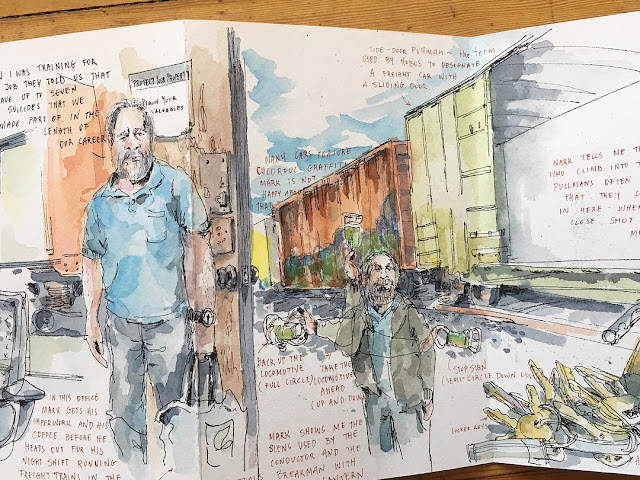 Mark is also a full time tuba player, playing with over 20 different orchestras and ensembles around Portland area. He has such a unique combination of occupations that following him around is an adventure in itself. I made a separate concertina about his tuba playing life.

He feels that being a tuba player and a train engineer are semantically connected by a button on his locomotive that sounds the horn alerting people of an approaching train. Tubas are sometimes also called horns and, similar to freight trains, are capable of making low loud sounds.

Mark feels that both of his occupations are perfect for his intensely romantic nature, and he considers himself very lucky to be paid for doing something he would love to do as a hobby.